Meet Devon Still – Defensive Tackle for the Cincinnati Bengals with a promising career ahead of him. His daughter Leah – an adorable 4-year old, recently diagnosed with stage 4 pediatric cancer… and a 50% chance of survival. When Still discovered the news of his daughter’s health last June, his focus shifted – from football to his daughter. He missed minicamp and team activities so he could be with Leah. Though, without his complete dedication to the team, the Cincinnati Bengals had to cut him. Devon understood the sacrifice that had to made.

Devon commented, “I completely understand where the Bengals were coming from when they cut me because I couldn’t give football 100 percent,” he mentioned in an ABC news interview. As a dedicated parent, Halting his career was a no brainer to Devin, but the results of quitting football, dealt another blow. He was without health insurance. Medical expenses, he was told, would easily total approximately $1 million dollars. It was the ultimate “Catch 22”, quit football to tend to his daughter, but quitting football also meant relinquishing the health insurance she very much needed. 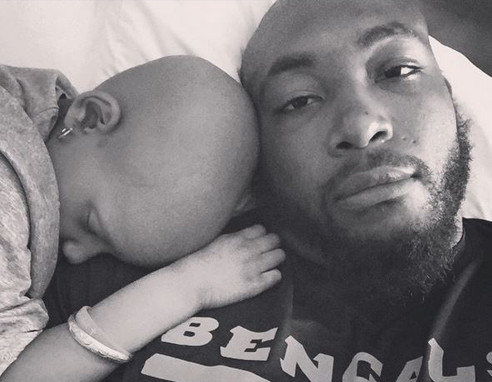 Devon’s sacrifice was not unnoticed, though. Later, in an unprecedented move, the Cincinnati Bengals came up with a touchdown of a heartfelt idea. The Bengals re-hired Devon for the practice squad. This would enable him to be closer to his daughter, support her during her hospital stays and continue to keep his health insurance so that she could adequately be treated.

Leah’s story has since touched the chord of the football community and beyond. Football fans have shown their support by wearing Devon’s jersey number – #75. Purchases of his jersey is available on the team’s website with the proceeds being donated to pediatric cancer research. Needless to say, sales of the jersey have amassed in fans proudly wearing #75 to the Bengals games.

Another website, <a href=”https://www.pldgit.com/campaign/768450939739702307″ target=”_blank”>PLDGIT</a> has been set-up for supporters to donate also. For every sack the Bengals Defense makes this season a donation can be made that will benefit Children’s Hospital in Cincinnati. This is where his daughter Leah is being treated. Proceeds will also be donated towards pediatric cancer care and research.

Ellen DeGeneres highlighted Leah’s story on her talk show and presented Devon with a donation of $10,000, a gesture that brought tears to his eyes. For a tough defensive tackle like Devon, tears is definitely not a sign of weakness but a display of strength. From his decision to support his daughter and galvanize support across the nation, Devon Still and his daughter Leah are evidence that this father and daughter team have what it takes to always keep them going, “Still Strong”.